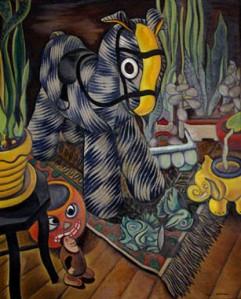 “Toy Jungle” is currently featured on my omeka site, Artworks of Mary E. Hutchinson.  For a still life of children’s toys and objects, it is really rather dark with a grimacing jack-o-lantern, gasping fish, and toppled bird figurine.  Hutchinson also painted a companion canvas titled “Spark Plug” which has a cheerier disposition.

Both paintings may be easel versions of Hutchinson’s 1933 WPA mural “Jungle.”  I don’t know where the mural was and have little hope that it has survived, but I have located both “Toy Jungle” and “Spark Plug” in private collections.

§ One Response to Toy Jungle Featured on Hutchinson Site

You are currently reading Toy Jungle Featured on Hutchinson Site at Jae Turner.